The Key Lookup operator provides a subset of the functionality of the Clustered Index Seek operator, but within a specific context. It is used when another operator (usually an Index Seek, sometimes an Index Scan, rarely a combination of two or more of these or other operators) is used to find rows that need to be processed, but the index used does not include all columns needed for the query. The Key Lookup operator is then used to fetch the remaining columns from the clustered index.

A Key Lookup operator will always be found on the inner input of a Nested Loops operator. It will be executed once for each row found. Since the key values passed in always come from another index, the requested row will always exist (except in rare race scenarios when read uncommitted isolation level is used).

Since a Key Lookup is only used in situations where the key values have been retrieved from another index (including the internal uniqueifier column in the case of a clustered index that is not declared to be unique), it always operates as a singleton seek, never as a range seek.

Depending on the tool being used, a Key Lookup operator is displayed in a graphical execution plan as shown below:

The icon design is a bit strange, especially when compared to the icon design of the RID Lookup operator, and the design of other operators that depict either an action on a heap, or an action on a clustered index. My theory is that the icons for Key Lookup and RID Lookup were accidentally switched when they were introduced in SQL Server 2005, and then Microsoft didn’t want to change it later for fear of causing even more confusion.

However, since a Key Lookup never has more than a single Seek Keys property and can only operate as a singleton seek, a lot of the logic in that flowchart is irrelevant to this operator. For easier understanding, the flowchart below shows only the logic that can actually be used by the Key Lookup operator: 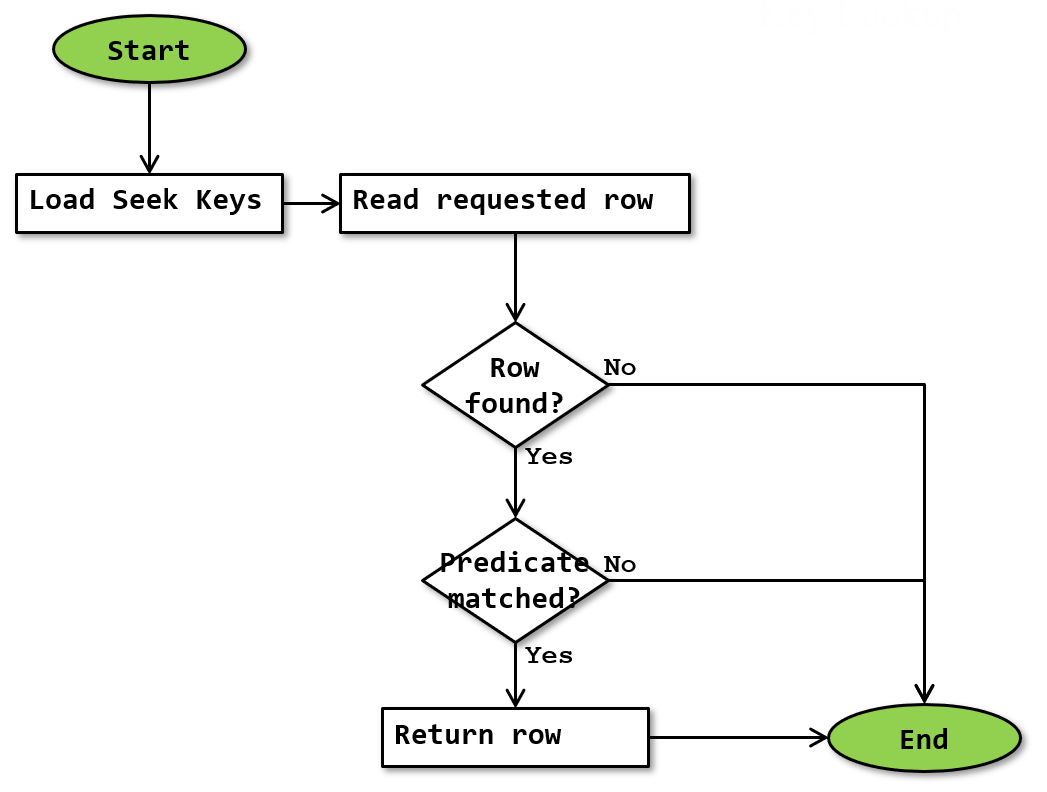 Note that, depending on the transaction isolation level that is in effect for the index being read, locks may be taken and released as rows are accessed. This is part of the responsibility of the storage engine, and a detailed discussion of this functionality is beyond the scope of this website.

The Seek Keys specification of a Key Lookup operator only uses a subset of the available functionality in the generic (Clustered) Index Seek operator. For a Key Lookup, only the Prefix Specification is used, and it always specifies all key columns. For a Key Lookup on a clustered index that is not declared to be unique, this includes the hidden internal uniqueifier column. Within the execution plan, this column is named using the mnemonic prefix “Uniq”, followed by a unique 4-digit number.

For a Key Lookup into a clustered columnstore index, the Seek Keys always lists a single column, the hidden internal column for the location of a row within the columnstore index. Within the execution plan, this column is named using the mnemonic prefix “ColStoreLoc”, followed by a unique 4-digit number.

The operator uses the Seek Keys specification to find the indicated row, reads it, but then first checks the Predicate property to determine whether to return the row, or return an end of data signal.

The flowchart above shows the basic outline of Key Lookup processing. Some of the actions can vary depending on the type of index that is used in the Index Seek. In the paragraphs below these differences are detailed per type of index.

For a RowStore clustered index (Storage = “RowStore”), the Key Lookup operator uses the B-tree structure of the index to find the requested row. If the index is not defined as unique, then the value of the hidden uniqueifier column will be read from a nonclustered index elsewhere in the execution plan and passed to the Key Lookup, in an internal column named “Uniq” + a unique 4-digit number.

For the “Read requested row” action, the internal data structures (which can be seen through the sys.sysindexes view) are used to find the location of the root page. It brings that page into the buffer pool and compares the values of the indexed columns in each entry (in correct logical order, based on the row offset table on the page) to the specifications in the Seek Keys specification. As soon as it finds an entry for which the values in all columns in the Prefix conditions are equal to or greater (lesser for descending index columns) than the specified target values, it goes back one entry (to the last entry that does not satisfy these conditions) to find the page to process at the next lower level. (If the very first entry already matches the conditions, then there is no prior entry and the first entry itself will be followed).

It now brings the page to process at the next lower level into the buffer pool and checks the page header. If the page is an intermediate level index, it is processed the same way as the root page to find the page at the next deeper level. This repeats until a leaf page is found.

Once a leaf page is found, it once more compares the values of the indexed columns in each row (in correct logical order, based on the row offset table on the page) to the specifications in the Seek Keys specification until it finds the row for which the values in all columns in the Prefix conditions are equal to the specified target values. This is the row to be returned (depending on the Predicate check, if needed).

When the read uncommitted isolation level is used, it is theoretically possible that the row to be returned does not exist in the clustered index. In that case, obviously, no row will be returned.

The structure and contents of this internal column are not documented. Based on my understanding of how columnstore indexes are designed, I have to assume that they include an identification of the rowgroup (probably its number), and an identification of the row within that rowgroup (probably an ordinal to represent its position). But since the row might be in an open rowgroup (aka delta store), the ColStoreLoc column should also be able to identify the row within the B-tree that stores the data within that open rowgroup.

Using the data in the internal ColStoreLoc column, the storage engine can immediately access the requested row. If the Predicate property is present and the ColStoreLoc column indicates a compressed rowgroup, the min_data_id and max_data_id columns in sys.column_store_segments (for the colums listed in the Predicate) are checked; if the data within the rowgroup can impossibly match the Predicate, the row is not accessed at all. If it can, then the data in the rowgroup is decompressed to fetch the requested row, the Predicate (if present) is checked, and if it qualifies the row is returned.

When the read uncommitted isolation level is used, it is theoretically possible that the row to be returned does not exist in the clustered columnstore index. In that case, obviously, no row will be returned.

This table below lists the behavior of the implicit properties for the Key Lookup operator.