The Split operator is typically used to optimize update processing, usually in combination with Collapse and Sort operators. This operator splits rows that represent an update into two rows each, representing a delete and an insert. Input rows that already represent a delete or an insert are passed unchanged.

Depending on the tool being used, a Split operator is displayed in a graphical execution plan as shown below:

The basic algorithm for the Split operator is as shown below: 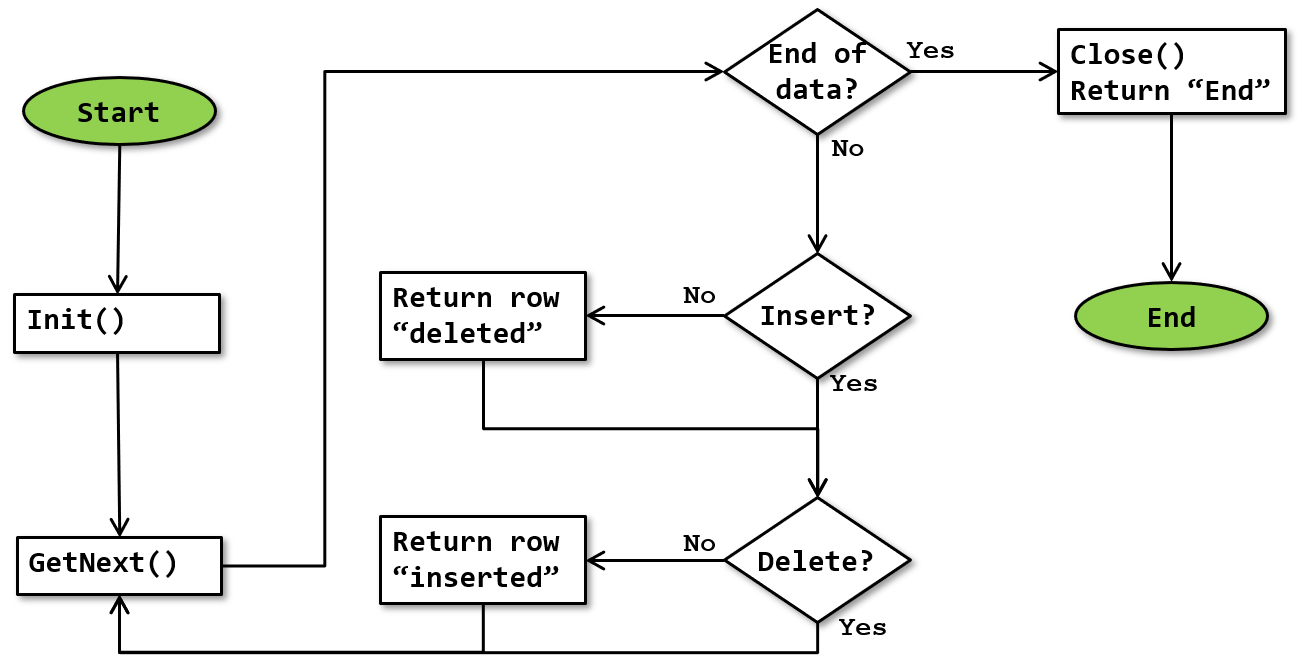 This flowchart is drawn on the assumption that, when an update row in the input is translated into a delete row and an insert row, they are retuned in that order, which is the most likely order. But so far there has not been any conclusive proof that this is indeed the case; in theory the inserted row could be returned before the deleted row.

The known values and their meaning for the action column (for any operator, not just for Split) are:

It is currently unknown whether there are more possible values. Based on what the Split operator does, its output will of course only use values 3 and 4 (delete and insert).

The Split operator can process rows that represent inserts, updates, and deletes. For rows that represent an update, both the old and the new value of some of the columns may be required. SQL Server uses a naming convention for this, where the new value is in a column named after the corresponding column in the table (typically using the four-part naming scheme consisting of database name, schema name, table name, and column name), and the old value is in a column that has the same column name followed by the suffix “_OLD” (typically using single-part naming).

For all pairs of columns in the input that adhere to this naming convention, the Split operator will treat the two columns as representing the old (before update) and new (after update) values of the data. All remaining columns in the input are then treated as containing new values for columns where the old value is not needed, or as helper columns for use elsewhere in the execution plan and where no corresponding old value of the helper column is needed.

Sometimes the input to the Split operator can contain a mix of updates, deletes, and inserts, for instance in an execution plan for a MERGE statement, or in complex update plans for tables that participate in indexed views. In those cases, the rows that represent inserts will have only NULL markers in the old columns, and the rows that represent deletes will have only NULL markers in the new columns.

It is currently not fully known how the Split operator determines what type of operation a row represents. The main theories are:

When the input row represents either a delete or an update, this action returns a row that represents a delete. Columns in the output row are determined as follows:

When the input row represents either an insert or an update, this action returns a row that represents an insert. Columns in the output row are determined as follows:

This table below lists the behavior of the implicit properties for the Split operator.