The Stream Aggregate operator is one of the two operators that perform aggregation on their input. It has a single input and a single output, and typically the number of rows in its output is far less then in its input because it returns just a single row for each group of rows in the input.

Stream Aggregate is the most effective of the two aggregation operators. However, it requires its input data to be sorted by the grouping columns. Often this means that a Stream Aggregate can’t be used without adding an extra Sort operator. This extra sorts increases the total plan cost. In such cases, the optimizer tends to choose the alternative aggregation operator, Hash Match.

Depending on the tool being used, a Stream Aggregate operator is displayed in a graphical execution plan as shown below:

The basic algorithm for the Stream Aggregate operator is as shown below: 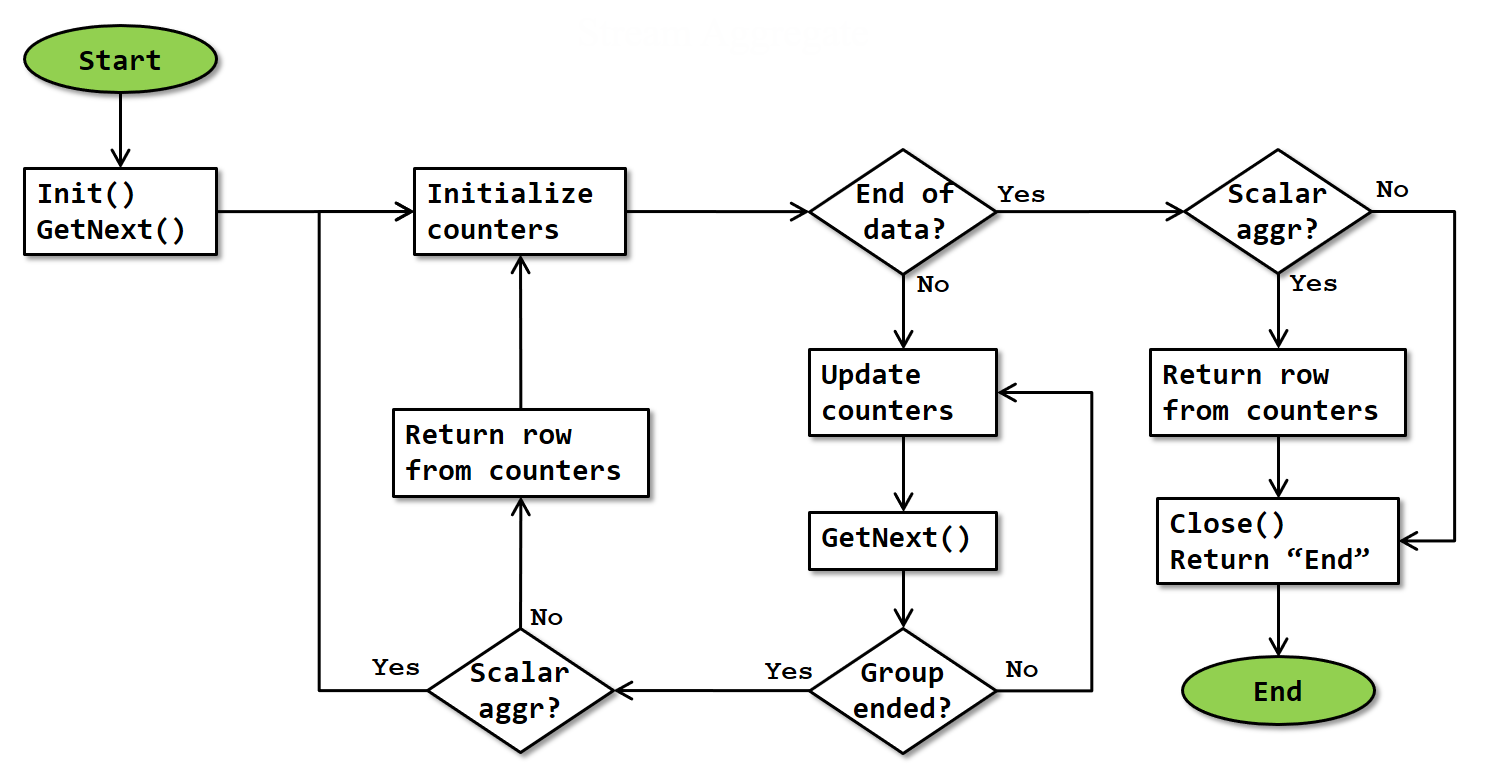 The flowchart shows how the operator processes the data from the input. The rows for a group are accumulated in internal counters and returned as soon as the group is complete. The optimizer ensures that the input data is sorted by the Group By columns. That means that all rows for a single group are adjacent in the input stream; as soon as a group is ended its data can be returned and a new group started. The end of a group is detected by encountering either a new value in a Group By column or (obviously) be reaching the end of the input data. At that point, the accumulated aggregations for the “previous” group are returned and the counters are reset in preparation for a new group.

When the operator has no Group By property, a scalar aggregation (a single row with the aggregation of all input rows) is requested. Processing is mostly the same as for “normal” (grouped) aggregation; obviously since all data is now a single group, the group only ends at the end of all input. It is important to notice that the results of a local aggregation are returned in a slightly different place then for a grouped aggregation. This is to ensure that the expected row with the aggregation results is returned even if the input stream returns no rows at all. (For a grouped aggregation, an empty input results in an empty results, which would be incorrect for a scalar aggregation).

On the other hand, there are also aggregation functions that the optimizer can use in a Stream Aggregate but that are not allowed in T-SQL, such as ANY.

The following is a list of the aggregate functions currently known to be supported by Stream Aggregate. (If you encounter an execution plan that includes a different function, then please save it as a .sqlplan file and send it to me).

The properties below are specific to the Stream Aggregate operator, or have a specific meaning when appearing on it. For all other properties, see Common properties.

This table below lists the behavior of the implicit properties for the Stream Aggregate operator.