The Index Spool operator is one of the four spool operators that SQL Server supports. It retains a copy of all data it reads in an indexed worktable (in tempdb), and can then later return subsets of these rows without having to call its child operators to produce them again.

The Index Spool operator is quite similar to Table Spool, except that Index Spool indexes its data, giving it the option to return a subset, and Index Spool lacks the option to read data from a spool created by another operator. The other two spool operators are quite different: Row Count Spool is optimized for specific cases where the rows to be returned are empty, and Window Spool is used to support the ROWS and RANGE specifications of windowing functions.

An Index Spool is sometimes called a “Nonclustered Index Spool”. This is a confusing and misleading terminology, because the storage structure imposed on the worktable is actually that of a clustered index.

A typical use case of an Index Spool is to gain performance when doing multiple passes over a table with a predicate that is not supported by an existing index. A very specific use case of Index Spool, combined with a Table Spool operator, is the “stack spool” used for recursive processing.

An Index Spool operator can function in two different execution modes, as determined by the Logical Operation property:

An Index Spool does not have the ability to operate as a “consumer” (see Table Spool for more details). However, it is possible for a consumer Table Spool to read data from an Index Spool – so far I have only seen this in the case of a stack spool.

Depending on the tool being used, an Index Spool operator is displayed in a graphical execution plan as shown below:

The basic algorithm for the Index Spool operator is as shown below: 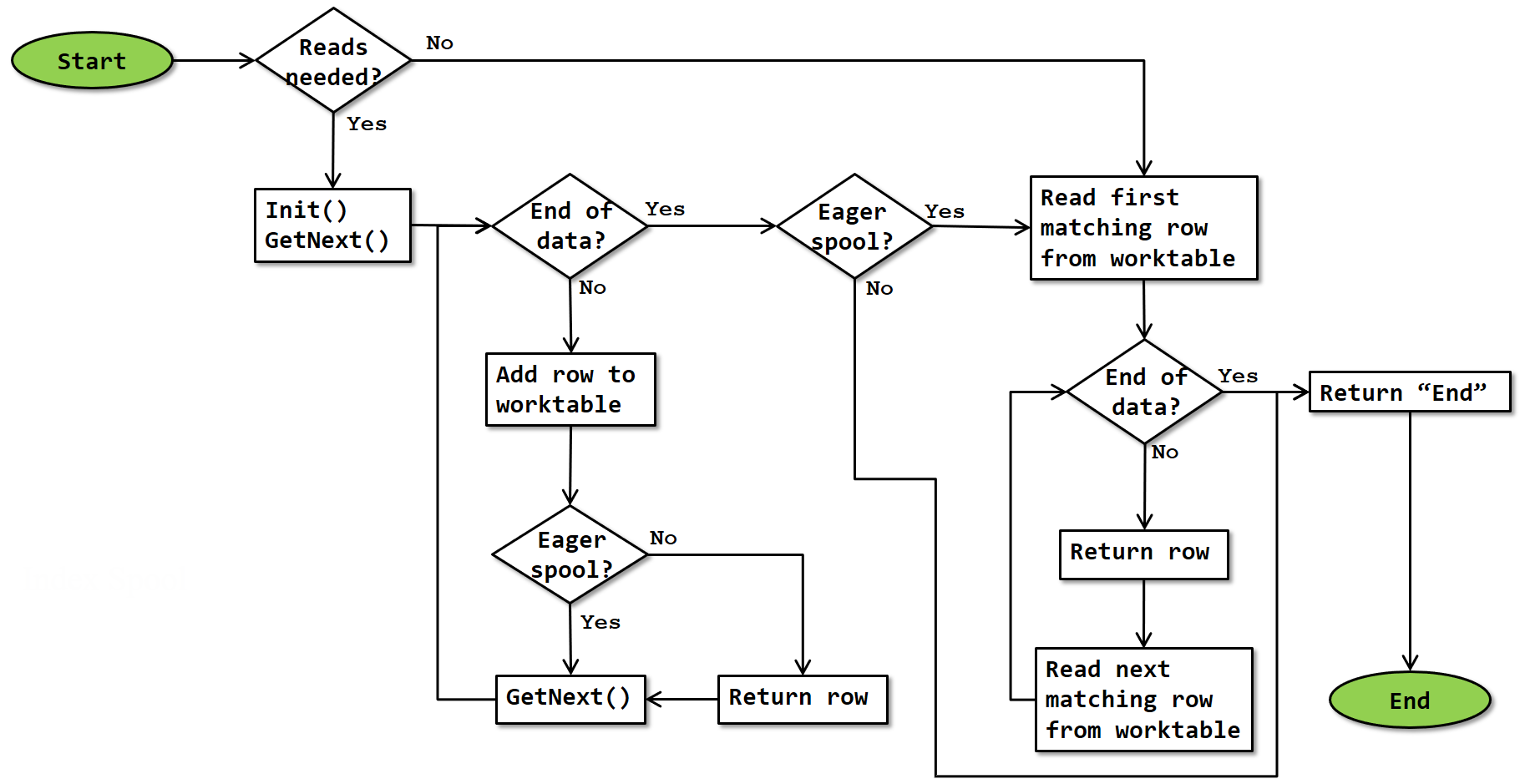 Note that this flowchart is a simplification. It doesn’t show that execution stops whenever a row is returned, and resumes where it was upon next being called. It also does not show that the operator’s input is closed when the operator itself is closed.

For the first execution of an Index Spool, reads are always needed. For an eager Index Spool, reads are not needed for any later executions. However, for a lazy Index Spool that may be executed more than once, the situation is complex. Unlike the regular Table Spool, Index Spool does not properly mark rebinds and rewinds and can hence not use this distinction to determine whether it would be required to execute its input (and even if it did, it would still be possible to receive a rewind using a value in the Seek Predicate property has been seen before, in which case the input should not be executed again).

I have so far not seen any occurrences of a lazy Index Spool on the inner input of a Nested Loops operator (which is the only situation where the operator would execute more than once). Perhaps the operator does not even support a lazy spool operation in that case, in which case there is never a need to determine whether or not to execute its input.

If it is supported, then I assume that it uses some way to determine whether or not the value in the Seek Predicate property has been seen before. One such way would be to simply check for matching data in the worktable, though this would introduce the risk of false negatives (if a value produces no rows, then passing in this value multiple times would result in redundant executions of the input). Another way would be to keep track of all values passed in, though it is unclear where this information would be stored.

If you ever see an execution plan that uses the Index Spool operator with a Lazy Spool operation on the inner side of a Nested Loops, then please let me know so I can research this further.

An Index Spool stores its data in a worktable. This worktable is structured as a clustered index on all of the columns that are mentioned in the Seek Predicate property.

For reading the first matching row from the worktable, the clustered index is navigated, using the same method as a Clustered Index Seek, to find the first row in the worktable for which the Seek Predicate property. If no matching row is found, then it is considered “end of data”.

A stack spool is a special type of spool. In execution plans, a stack spool is represented as an Index Spool in lazy spool mode and a Table Spool in consumer mode, both with the With Stack property set to True.

The Index Spool part of a stack spool always executes once, as a lazy spool. This means that it never reads its own worktable, it only stores rows there for the Table Spool part to read.

Because the Index Spool part of a stack spool does not read its own worktable, it does not need a Seek Predicate property. That implies that this property cannot be used to determine the index columns for the worktable. Instead, the worktable of a stack spool is always structured as a clustered index on a single column that represents the recursion level. This column is computed by other operators within the execution plan, and will be the first column in the Output List property.

The Index Spool operator has a limited awareness of parallelism, depending on the execution mode and phase.

When no reads are needed (data is already in the worktable), then all threads operate independent of each other, and the operator effectively is not parallelism aware.

When reads are needed and the Logical Operation is Lazy Spool, then the parallel threads may well interfere with each other. The Index Spool always uses a single worktable, so multiple threads adding rows in parallel might clash. I assume that standard locking and latching methods are used to protect the threads from each other, so that the operator itself doesn’t have to consider whether or not it is running in parallel. The operator can still be considered to be unaware of the parallelism going on, but for a full understanding of the execution plan we need to understand that threads might momentarily block each other on inserts into the worktable.

When reads are needed and the Logical Operation is Eager Spool, then the child operators return all rows that need to go into the worktable. Running those on multiple threads would result in duplicate data in the worktable. So in this case, the operator needs to be aware that it is running in a parallel plan. The first thread where the operator receives a read request kicks off the process to build the worktable, all on that thread. All other threads that receive a read request while the worktable is being built will simply wait until the build process is finished, and then process according to the “no reads needed” logic.

The properties below are specific to the Index Spool operator, or have a specific meaning when appearing on it. For all other properties, see Common properties.

This table below lists the behavior of the implicit properties for the Index Spool operator.