In my last two posts, I presented use cases for the Actual Number of Rows and Estimated Number of Rows properties, and showcased one shortcoming. Was that the only problem with these properties?

The visual of the arrows in an execution plan strongly suggests that they represent the flow of rows from one operator to another. And hence, the width of that arrow strongly appears to be an indication of how many rows are passed between the connected operators. That used to be always the case. But unfortunately, this changed in December 2017 (or earlier, but that was when I first noticed the change).

The problem with these properties is that, as of the 17.4 update of SQL Server Management Studio, the rendering logic for execution plans was changed to base arrow width on Number of Rows Read when available, instead of basing it on Actual Number of Rows as was the case before. When I first noticed this I thought it was a bug and reported it as such, but Microsoft closed it with a comment suggesting that this was a deliberate decision, as a way to visualize the amount of work done by the operator.

I understand the desire to make operators that do a lot of work stand out. I understand that, for Scan and Seek operators with a Predicate property, there is no incoming arrow that can be rendered with extra width to show more rows being read and processed. But I disagree with Microsoft’s choice to then use the outgoing arrow for this indication instead. It’s far too easy to be misled into thinking that a wide arrow between a Scan and its parent operator represents a lot of rows being returned to, and processed by that operator. And even if I am not misled, then I now still have no good visual indication of the amount of work that DID get returned to the parent operator.

In SentryOne’s Plan Explorer, scan and seek operators that read more data than they return are called out by putting a warning symbol on that operator. Why not use that same method in Management Studio? Or, if that’s not desired, why not add an extra icon that represents the storage subsystem, so that SSMS can now draw an arrow to represent how many rows were read from storage by the operator, without having to abuse an arrow that should be used for the amount of rows it returns?

I have created a new feedback suggestion with this request. Please vote for it if you agree! 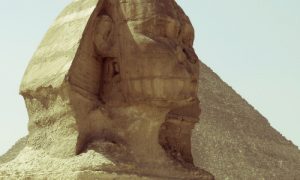