Some time ago a reader reached out to me with a request for help. He showed me a query and accompanying execution plan, and asked if I could help reduce (or, better yet, eliminate) the many hash spills that were killing his performance.

While helping him work through the plan, I was once more reminded of one of my pet peeves with execution plans: we get to see the requested memory for the plan (the Memory Grant and MemoryGrantInfo properties), which is of course based on the estimated total memory usage of operators that are active at the same time. We also get to see the actual memory used by each individual operator (in the Memory Usage property). But there is no way to see how much memory the optimizer estimates for each individual operator.

That makes troubleshooting all kinds of memory grant issues harder than it should be. And Microsoft could probably help us quite easily. The optimizer computes the estimated memory for each operator anyway. Why not expose that in the execution plan?

So I made a suggestion to Microsoft to do exactly that. Go here and vote for it if you support the idea.

Can Memory Fractions be an alternative?

At this time there is no way to directly see in an execution plan how much memory each operator contributes to the Memory Grant. If you know how each operator works, then you can do it indirectly. For instance, when a Hash Match operator performs an Inner Join, then it wants to store the entire build input (the upper input in the graphical execution plan) in an in-memory hash table. So you can look at the Estimated Number of Rows and Estimated Row Size properties of the top input (or even look directly at the Estimated Data Size that SSMS pre-computes for you if you hover the arrow) to get an idea of how much data SQL Server estimates to be stored.

But that is a rather roundabout way and requires that you know for each memory-using operator what exactly it wants to store in memory. It would be so much easier if we could just get this directly from the properties of each operator. So at this point I was tempted to see if, perhaps, the Memory Fractions property could be used to reconstruct the required memory for each operator.

The brief answer is: No.

Sadly, the Memory Fractions is not a good source for this information. But to understand why, a much longer explanation is needed.

The actual query used to create this execution plan is not really relevant for this post. I will attach a script that you can use to reproduce this execution plan, just in case you really want to, but it’s not needed. Also, the plan above is for SQL Server 2017. You might see minor differences on other versions, but nothing that really impacts the rest of the explanation.

I added small red numbers in the picture above. These are the values of the Node ID property of each operator. I will use these numbers to refer to a specific operator in the rest of the explanation.

To understand how this execution plan runs, and how memory is managed during that time, we’ll have to go through it in detail. For the explanation below I will assume that you are already aware of the phases of the Hash Match operator. If not, you can click here to find that information.

So at this time, operators 0 and 1 have started, but have not received any data yet. So they also don’t story any data yet. Operator 2 is receiving and storing rows, produced by operators 3 and 4. The rest of the execution plan is not yet active. As rows are processed, operator 2 will gradually increase its memory usage, until it is done processing its build input. At this time (assuming there are no spills), its entire build input is in memory.

If you look at the Memory Fractions property of operator 2, and then specifically the Memory Fractions Input subproperty, you can see that it is set to 1, which represents 100%. During the time this operator processes its (build) input, it is the only operator actively using memory, so it can use 100% of the memory that is needed for this stage.

Hash Match 2 now closes its build input. The data in memory must remain there for now, because it opens its probe input and matches data received there (from operators 5 and 6, that do not use memory) to the data stored in the hash table. It returns matching rows to operator 1, also a Hash Match, but this one is still in its build phase.

The memory usage of operator 2 is constant in this stage. It cannot remove even a single row from its hash table. But operator 1 now needs to store the data is receives, building a second hash table. So the total required memory for this stage is higher than it was for the first stage. The two now active memory-using operators have to share the available memory.

This tells us something about the estimated memory requirement for operators 1 and 2, relative to each other. Apparently, the optimizer thinks that operator 2 needs 33% more memory than operator 1. But we still do not know whether we can safely relate this to the full Memory Grant. There are more phases left to explore.

Hash Match 1 knows that it now has its hash table completed. It closes its build input, by calling the Close() method on Hash Match 2. One of the effects this has is that Hash Match 2 now releases all the memory it was using. After all, it now no longer needs the data it had previously stored in its hash table.

After Hash Match 2 (and also Top 5 and Clustered Index Seek 6) are closed, Hash Match 1 starts its probe phase, so it calls Hash Match 7 and requests a row. Hash Match 7 is now active for the first time. It needs to process its build input first. So in this third stage, all that happens is that Hash Match 7 repeatedly calls Top 8, which calls Clustered Index Scan 9, and all rows returned are stored in the hash table of Hash Match 7. Hash Match 1 is not actively receiving or processing any data, but it does need to keep its own hash table in memory. That’s why this operator is still marked as active in the screenshot above.

Such a lucky coincidence. Or is it?

Plus, there is also absolutely no way to determine how much the value is bumped. The figure 0.35 I used in the explanation above is just a random number I grabbed out of thin air. It could also have been 0.4. Or 0.18. The only thing I know for sure is that it cannot be more than 0.428571, since it is always the lower number that gets bumped up, never a higher number that is adjusted down.

Once the build phase for Hash Match 7 is over, operators 8 and 9 close. The probe phase now starts. Hash Match 7 requests rows from operators 10 and 11. It matches rows returned to the data in its hash table, and when it finds a match, it returns data to Hash Match 1. This operator is also in its probe phase, so it does the same logic on its own hash table, also outputting matching data to its parent, Hash Match 0 (which does aggregation rather than joining). This operator is now in its build phase, where it stores data in its hash table in memory.

The shaded area once more shows which operators are active. As before, active in this context refers to actually needing memory, although in this stage of execution these operators are also actually passing rows between them.

Both Hash Match 1 and Hash Match 7 are now returning data, so they are in their output stage; we need to check their Memory Fractions Output from the screenshots I included above in this post. To the right is the Memory Fractions from Hash Match 0. This operator is in its build phase, so we’ll look at the Memory Fractions Input here. That gives us 0.0285714 for Hash Match 0, 0.441558 for Hash Match 1, and 0.52987 for Hash Match 7. They don’t add up to 1 exactly on your calculator, but that’s because they’re all rounded to six significant digits. For the very low Memory Fractions Input of Hash Match 0, that adds one extra digit because the first 0 after the decimal separator is not a significant digit. Without the rounding difference caused by the representation, the real internal numbers actually do add up to 1. We once more have some interesting information about estimated memory usage for these three operators relative to each other. But we still cannot relate that to the total Memory Grant of the query.

Just for completeness sake, let me quickly finish the analysis. Once the probe input for Hash Match 7 returns no more rows, this operator returns the end of data signal to Hash Match 1, which in turn returns end of data to Hash Match 0. Both Hash Match 1 and Hash Match 7 can now close. They release their memory, because their hash tables are no longer needed.

Hash Match 0 then enters the “final” phase, where it simply returns data from its hash table, one row at a time. Its hash table remains in memory at this time. But no other operators need memory. All available memory can be used for this only active operator, hence the Memory Fractions Output is set to 1.

For each stage, the relevant Memory Fractions Input and Memory Fractions Output can be used to assess the relative expected size of the memory usage of those operators. But beware. When the “raw” numbers would add up to less than 1, the optimizer increases these numbers where possible. I suspect that this is so that these numbers can be used at runtime to optimize memory management, and it would be a shame to let a part of the available memory go to waste. But that does have the side effect that we often don’t know whether the numbers in the plan are an actual representation of the relative memory requirement, or if they are bumped.

If you want to know how much each individual operator contributes to the Memory Grant, then you will either need to know what data each operator stores in memory and then use the estimations of that data in the plan to get an idea, or you can vote for my suggestion to add estimated memory usage of individual operators as a new property in execution plans. 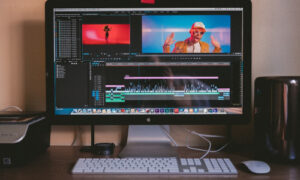