I will admit that I had not really planned to cover CLR in this series. But shortly after publishing the first part, I received an email from Adam Machanic, which basically said that I should make clear that the information in that post does not apply to CLR functions. So I dutifully added a comment to that post, and included a similar disclaimer in the second part – but I also planned to run some tests, for it is my strong belief that you should never take anything for granted, no matter how knowledgeable the person telling you it is. And if I am running those tests anyway, why not share my findings with you?

The first part of this post focused on scalar user-defined functions (UDFs) that don’t include any data access; only computations, string handling, etc. I used a very unrepresentative example: multiplying an integer value by 3. Here is a CLR equivalent (using C#) of that function:

In order to test the performance of this version of the function and compare it to the alternatives (T-SQL function and inline logic), I ran this batch against the LargeTable table, which is still populated with ten million rows.

The execution plans immediately show a huge advantage of CLR UDFs over their T-SQL counterparts: they don’t inhibit parallelism!

But other than that, this execution plan is doing pretty much the same as all other execution plans in this series of blog posts: lying until it is black in its face. Because that is what execution plans do when UDFs are involved, and CLR functions are no exception. For the real comparison, I ran the same batch without outputting the execution plan (to eliminate their overhead) and checked the amount of CPU time used and the time elapsed. For the T-SQL function, CPU time was 35,709 ms, and elapsed was 38,621 ms. The CLR version used less CPU time, only 13,072 ms – a huge saving. And thanks to the parallelism, the saving in elapsed time was even more: only 2,071 ms left.

Given the total lack of complexity in the UDF, the huge performance difference between the CLR and T-SQL versions of the function cannot be explained by CLR code being faster than T-SQL code (though that is definitely the case – see below). The only explanation I can come up with is that invoking a T-SQL involves a lot more overhead than invoking a CLR function. However, the CLR function is still not entirely free of overhead, otherwise it should have performed about the same as the version with the logic inline.

Up until now, the conclusion is that, even though scalar CLR functions definitely perform much better than scalar T-SQL functions, the best performance is still achieved by placing the logic inline. But there are exceptions to this rule. As already mentioned above, CLR code executes a lot faster than T-SQL code – so if you have a function that performs extremely complicated logic, it may well be worth your time to do a thorough comparison between inlined logic and a CLR function.

Because I wanted to use a realistic example, I decided to dig up the code I wrote many years ago, when I needed to compute the distance between points on the earth on SQL Server 2005 (before spatial data types were introduced). The formula used to calculate the distance between two points, given their latitude and longitude, is as follows:

This formula assumes that the input and result are all measured in radians. The data set I used for testing has locations with latitude and longitude measured in degrees, and I prefer to see the distance reported in kilometers, so we’ll have to add some unit conversions to get the correct results.

I first implemented this calculation as a T-SQL scalar user-defined function:

— Convert from degrees to radians

— Calculate the distance (in radians)

— Convert distance from radians to kilometers

To test its performance, I used a table that Microsoft included as part of the product samples with SQL Server 2005 (I believe these samples are still available on CodePlex). This table includes geographic data for almost 22,993 places in the United States of America. For my test, I chose to calculate the distance between each pair of places in the state Texas; since there are 1,276 places in this state, the function will be invoked 1,276 * 1,276 = 1,628,176 times. To make sure that my test is not influenced by the time to send results to the client or render them on my screen, I included the MAX function, so that only a single number is sent to the client.

This query took over half a minute to finish. 31,449 ms CPU time, and 34,392 ms elapsed time. The time per execution of the user-defined function is decent enough (only about 21 ms), but because of the sheer number of executions, the total running time is still pretty long.

Before moving to the CLR version of the distance calculation, let’s first try what happens if I avoid the user-defined function and instead place the calculation inline. After all, this proved to be a useful technique in the first part of this series. For this query, the downside of inlining the logic is that it results in a pretty much unmaintainable query – but it does indeed result in an impressive performance boost!

The CPU time is way down, from over 31 seconds to less than 8: 7,956 ms. Elapsed time is down even more, because the optimizer can parallelize this plan – only 1,557 ms! That is a very nice reduction, but still no reason to stop. As the amount of data increases, even this version can run into performance problems. For instance, when I simply omitted the WHERE clause to make SQL Server find the maximum distance between any of the almost 23,000 places in the database (involving over 500 million distance computations), the query ran for almost five minutes, with an elapsed time of 282,580 ms, and a CPU time of 2,155,995 ms! That’s a good reason to try to optimize this further.

And that brings us back to the subject of this post: CLR scalar user-defined functions. I have implemented the same distance calculation as a C# function:

// This is just a wrapper for the T-SQL interface.

// Call the function that does the real work.

// Convert from radians to kilometers

The results show that this version is even faster than the T-SQL query with the computation inline, although only marginally. The CPU time is 7,798 ms, and the elapsed time is 1,459 ms. This means that the distance of the maximum calculation across all the places in the United States should also become slightly faster, and indeed it does – the elapsed time is 257,081 ms, and the CPU time is 2,010,774 ms. Still very slow, so if I had to tackle this problem for a real client I would start looking for other optimizations – but in the context of this blog post, I only wanted to show that using CLR scalar user-defined functions for complex computations can sometimes perform better than trying to do those computations in T-SQL only.

Of course, performance is not always the only deciding factor. Maybe you already have the CLR function because it’s also called from your .Net code; in that case, you can save a lot of development and maintenance effort by reusing that component in your T-SQL code. Maybe you need to do something that is only possible from CLR code (like calling a web service – as long as you are aware that this will have a REALLY detrimental effect on performance!), or something that is simply so much easier in CLR code (like using standard methods for regular expression pattern matching, that would be extremely complicated to code in T-SQL code). Or maybe your UDF will only be called five times per day, and never in a query that processes more than a single row. At the end of the day, you will have to make your decision, based on all the factors that are relevant in your specific scenario. 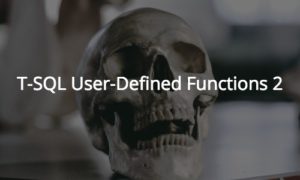 T-SQL User-Defined Functions: the good, the bad, and the ugly (part 2)